What's this? This is an unbiased just-the-facts news summary about Lucy Hale, extracted from the original article by Newslines' contributors. To see the newsline of each topic, click the links below. Learn more 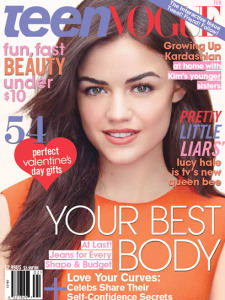 Hale appears on the cover of the February 2011 issue of Teen Vogue magazine. She talks about how she got started acting, Taylor Swift, and online shopping.

I’ve only been living here for a few years. I never thought about acting when I lived in Memphis actually, pretty much the opposite. I wanted to be a singer. Someone randomly suggested I audition for a few things. I thought, Why not? And I got a role on [Nickelodeon’s] Drake & Josh. It was literally just a sentence, but I was so excited to be an actress.