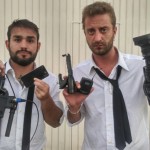 Reporters for the satirical Italian TV programme ‘Le Iene’ (The Hyenas) instruct their lawyers to take legal action against Marquez and his relatives for assault, injury, slander and theft. They say says that the version of events released by Marquez’s lawyers is unverified, and insist that Marquez was not insulted or humiliated, and that it was actually the two reporters who were assaulted. The programme says it will release graphical evidence which “documents exactly what happened” on Monday Nov 2.