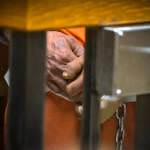 Both suspects are being taken to the county jail.

Marquez is confirmed to have a drivers license issued in Salt Lake City. The female suspect, who is being described as an accomplice, has a Sacramento address.

Marquez leaves the hospital and is taken to prison. He is thought to have been treated for a hand injury. The Sheriffs Department does not believe that he was shot at all during capture. A photo is released showing Marquez on a stretcher.

Marquez is taken to the Auburn Hospital off Highway 49.

The suspect is confirmed to have been taken into custody at a home on Belmont Drive.

Marquez is identified as the suspect. A Sacramento county sheriff’s deputy is shot once in the forehead in the parking lot of the Motel 6 located on Arden Way and Ethan Way in Sacramento. The shooting occurs around 10:22 local as he responds to a suspicious vehicle with a man and woman sitting inside. The shooter uses an AR-15. Oliver does not get a shot off, but his partner is able to fire on the suspect. A motel guest says he saw the police vehicle drive around the back, and heard automatic fire:

I walked to the back, looked over the rail and saw the officer down

If you snuck outside you could see him lying there. I heard the shots, like nine of them. It was terrible.

She says responding emergency crews performed chest compressions on the officer before he was placed on a gurney and taken to a hospital. The male and female suspects flee in a car.