What's this? This is an unbiased just-the-facts news summary about Mark Zuckerberg, Vanity Fair, extracted from the original article by Newslines' contributors. To see the newsline of each topic, click the links below. Learn more 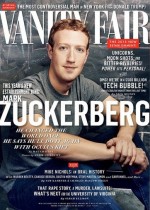 No company in history has ever achieved the scale of Facebook, which now reaches nearly 1.5 billion total users. Nor has there ever been a mogul quite like Zuckerberg. He rules, with near omnipotence, over Silicon Valley’s grandest empire, and remains eager for more.