What's this? This is an unbiased just-the-facts news summary about Megan Fox, extracted from the original article by Newslines' contributors. To see the newsline of each topic, click the links below. Learn more 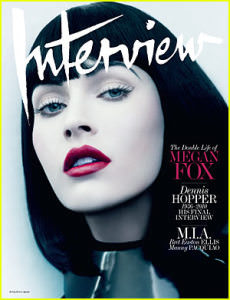 Fox appears on the cover of the June/July 2010 issue of Interview magazine. She talks about her dislike for the paparazzi, regretting comparing Michael Bay to Hitler.

In the past, I’ve been reluctant to share any bits of truth about myself or to really let people in on my reality. So I have said some things to throw people off the scent of what’s really going on in my life. So I have sort of aided the media in printing these misconceptions, which I regret.