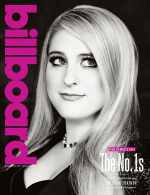 Trainor appears on one of four covers of a December 2014 issue of Billboard magazine. She talks about her song All About That Bass.

I came to my session with producer Kevin Kadish with a list of titles, and immediately I was like, ‘Let’s do booty! And thickness! Like, it’s about the bass, not the treble,’ and he was into it. When you have a session, it’s like a blind date — you meet a stranger and make nice with them. He was telling me how he loved ’50s stuff, and I told him how I listened to Frank Sinatra before every session. He started making this beat to make it modern, and I started the first verse freestyle because I was like, ‘I rap.’ When a little white girl walks in and says, ‘I’m a rapper,’ they don’t actually want you to rap. But he was all about it.