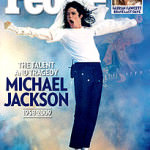 Jackson appears on the cover of People after dying weeks before his concerts in London were to take place. There were allegations that drug use was involved in Jackson’s death. Source:

Janet was on the phone, but siblings Randy, Jackie and Rebbie were there. Michael got pissed off. He said he wasn’t on drugs. Jackson also drank and took straight morphine, Valium, Xanax, Demerol and OxyContin. It could happen any minute.