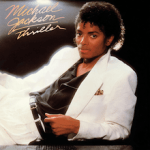 He was always up for trying new things. I remember Michael sang through these long cardboard tubes to get a particular sound — that’s something Michael came up with, I believe.