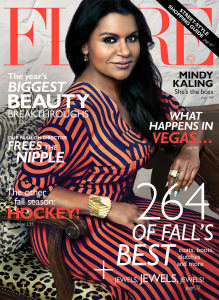 Kaling appears on the cover of the October 2014 issue of Flare magazine. She talks about wanting kids, the benefits of being single, and sexism in the television industry.

Of course I’m riddled with doubts like every other creative, neurotic person, but if you don’t display them all the time, you’re seen as overconfident. I’ve worked in television for 10 years straight. If I were a man, it wouldn’t be considered strange [to have confidence] at all.