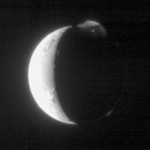 New Horizons and Io continue to astonish us with these unprecedented views of the solar system’s most geologically active body.