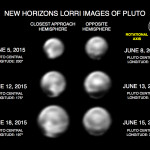 NASA releases a series of photos of Pluto as the New Horizons probe approaches. The close approach hemisphere that the probe will pass by shows the greatest variation in surface features. The probe is 4.7 billion km (2.9 billion miles) from Earth and just 25 million km (16 million miles) from Pluto.

This system is just amazing. The science team is just ecstatic with what we see on Pluto’s close approach hemisphere: Every terrain type we see on the planet—including both the brightest and darkest surface areas —are represented there, it’s a wonderland!