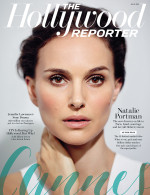 Portman is interviewed by The Hollywood Reporter and appears on the cover: On Netanyahu:

I’m very much against Netanyahu. Against. I am very, very upset and disappointed that he was re-elected. I find his racist comments horrific. However, I don’t — what I want to make sure is, I don’t want to use my platform [the wrong way]. I feel like there’s some people who become prominent, and then it’s out in the foreign press. You know, shit on Israel. I do not. I don’t want to do that.

On Ramsey leaving Jane Got a Gun,  just days before the shoot:

I’m as mystified as I think everyone was, and it was pretty devastating. I mean, maybe she’ll speak to it one day. I don’t know. I got there one week before we were supposed to start, in Santa Fe, and it seemed like there had been stuff going on that I had sort of been sheltered from. And yeah, it was really, really difficult, and we were lucky that [director] Gavin [O’Connor] came on so quickly. She didn’t come on [set]. I saw her like the week before, but on the first day, no. I can only imagine something very difficult was going on for her, and it was devastating.

The disappointments are always in myself, and like, when you’re faced day to day with someone looking at you, it’s like a mirror that you have to yourself, and you can see your own good behavior and bad behavior. And it’s a beautiful challenge to be the best person in the mirror that you can be. I mean, I don’t beat myself up over it, but I’m not always as generous as I feel like I could be.