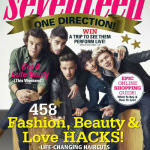 One Direction appear on the cover of the November 2014 issue of Seventeen magazine. They discuss their upcoming album Four, as well as their surge in popularity.

‘You look at the names of who’s played at Wembley and you almost feel like you’re not worthy of it. We just feel like we’re just little scumbags’, he added.