Wilson tells Kimmel that he is nearly detained in Thailand while on his way back to the U.S. from filming an action thriller No Escape.

The day that I was leaving, somebody asked for a picture and gave me something to put around my neck… I guess this thing that I put on identified me with the rebels – I’m not kidding. All of a sudden, they (authorities) were calling the prime minister’s office saying that I was going to be detained from leaving (sic) because these colors and that whistle meant that I was siding with the protesters.

Wilson stars in the movie Free Birds as Reggie the Turkey who has always been afraid of Thanksgiving because turkeys are always been on the menu. His attempts to warn the other turkeys make him an outcast. When the other turkeys finally realize what is going on, they throw Reggie outside in an attempt to save themselves. In a surprise twist of fate, he winds up being named the pardon turkey by the President of the United States. Co-starring Woody Harrelson, Amy Poehler, George Takei, Keith David and Dan Fogler.

We did have some sessions together. I don’t know if there’s any more magic in those sessions than we were apart.

Wilson plays John in this dramedy directed by David Frankel from the memoir written by John Grogan. John is married to Jenny, played by Jennifer Aniston, and together they adopt a Labrador puppy. The 12 pound puppy quickly grows into a 100 pound unstoppable bundle of energy that dominates their lives and teaches them how to be the best people they can be.

That was what was nice about the movie that the situations didn’t feel ever contrived. Everything seemed kind of relatable so it wasn’t difficult to understand, this makes sense what he’s feeling. 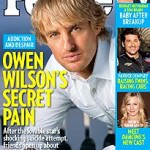 Wilson appears on the cover of People after his issues with drugs. Wilson attempted a suicide by slashing his wrist but was was rushed to the hospital for treatment.

It’s impossible. He’s far too full of life and is at the prime of his career. Owen was very despondent. He slit his wrists. He almost did not make it.

Hudson and Wilson split after less than a year of dating. It was rumored that Goldie Hawn wanted Hudson to break up with Wilson because he slashed his wrist and she didnt think it was wise for her to date someone that was unstable.

Hudson and Wilson begin dating. Rumors began of the couple dating after being spotted in various public outings. A rep for Wilson goes from denying the rumors of dating, to having no comment on the possible relationship. The couple started dating one month after Hudson separated from her husband.