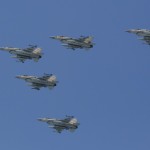 Israeli Defense Forces jets strike targets in a retaliatory attack for rockets fired into southern Israel from Palestine with at least one exploding. There are no reports of casualties thus far. Israel confirms the airstrike. Spokesperson:

The Israeli Air Force retaliated on Sunday for rockets fired at Israel from Gaza on Saturday night by striking terror sites in the northern Gaza Strip.