Rudd appears on The Late Show for promoting his movie Ant-Man. He talks about how he was a member of a Letterman fan club as a child.

About 30 years ago, when you first started the show, back when the [Kansas City] Royals were in the World Series, I joined the David Letterman fan club…What it included was a pin, a collapsible drinking cup, a sponge that – if you put in water – would grow, a back scratcher and a balloon.

For the Night of Too Many Stars autism benefit, Rudd agreeds to let audience members come up on stage, spin the wheel, and do to him whatever the wheel instructs. Stewart MCs. One woman slaps him, and when the wheel hits Baby Bird, Joe from Queens gets to spit some food into Rudd’s mouth.

Night of Too Many Stars - Wheel of Rudd

Rudd, fan of the Kansas City Royals, celebrates as the Royals shut out the Baltimore Orioles to advance to the World Series for the first time since 1985. Rudd:

I know for the last several years, every year, all of us Royals fans we have the same hope. … When we went on that win streak this summer, it was like, this could legitimately happen. I’ve lost my voice, but I’ve lost my voice at just about every game since the Wild Card. (Tonight’s win) was amazing. This entire town feels it. I’m going to be partying at my mom’s house!Party at my mom’s, man. She’s out of town; I’ve got a keg. It’s going to be sweet! Five dollar cover! 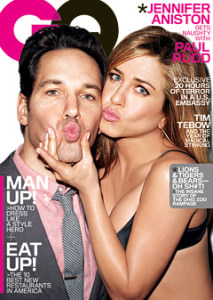 Aniston and Rudd appear on the cover of the March 2012 issue of GQ magazine. The actress talks about having kids and rumors.

I still kind of go with, if it happens, it happens. I’m calm and peaceful with whatever the plan is. It’s not something where I’m going, ‘I gotta have a kid!’

Seacrest interviews Rudd during On Air With Ryan Seacrest about jokingly throwing away Harvey Weinstein’s Oscar.

It was kind of legitimately scary. Even if you’re playing around and he’s a good sport, it’s still weird to insult the guy and throw his Oscar in the trash in front of him.

Rudd gives his thoughts on which of his films influenced his life the most:

Wet Hot American Summer was the first one that felt like my own sensibility. It was just so fun. And Anchorman marked a tidal shift in my career. After that I started working with Judd [Apatow] and doing a lot more comedies.

Rudd gives interview to Elle about growing up while moving around a lot and if it had any part in him choosing acting as a career.

I’m sure that somehow played into my dysfunction. I’m sure that my wanting to be an actor had to do with a need for approval. People say, `Oh yeah, I do it for the art.’ It’s like, `No, you do it so people will tell you that you’re worthy.