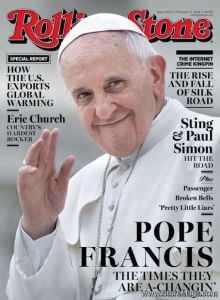 Francis appears on the cover of the first February 2014 issue of Rolling Stone magazine. Inside the magazine, there is a profile of Francis by editor Mike Binelli.

In less than a year since his papacy began, Pope Francis has done much to separate himself from past popes and establish himself as a people’s pope.