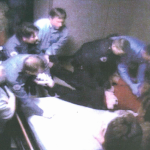 The Guardian reports that Kidd and Weibel, the officers who corroborated Tensing’s account of Dubose’s shooting, were implicated in prior death of another unarmed black man. Kelly Brinson, a 45 year old hospitalized mentally ill black man experiences a psychotic episode and is placed into a seclusion room by seven University of Cincinnati officers. According to the lawsuit, before Brinson was placed in restraints he “repeatedly yelled that slavery was over and he repeatedly pleaded not to be shackled and not to be treated like a slave”. One of the officers shocks him three times with a taser and puts him in restraints. Brinson suffers cardiac arrest and dies three days later leaving behind a young son, brother and sister. Court documents state:

All seven officers are accused of using excessive force and acted with deliberate indifference to the serious medical and security needs of Mr Brinson.

Brinson’s family settled a federal civil court case with the hospital and the police department for $638,000. All University of Cincinnati campus police officers were also removed from patrolling the psychiatric wards at the hospital after Brinson’s death.