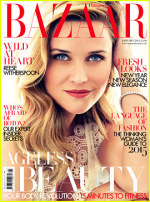 Witherspoon appears on the cover of the January 2015 issue of Harper’s Bazaar UK magazine. She talks about being stereotyped in Hollywood, why she finding comedies less daunting, and limitations on roles offered to actresses.

It wasn’t as if there was a lack of roles being offered to me. It was the dynamic aspect of playing a really interesting, complicated person that was not readily available. Honestly, I don’t know a woman who isn’t complicated. It’s strange that you don’t see many complicated women on film; complicated meaning complex, I should say.