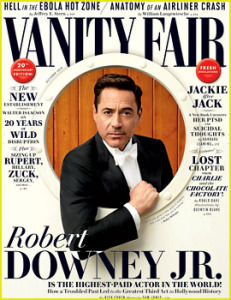 Downey Jr. appears on the cover of the October 2014 issue of Vanity Fair magazine. He talks about his son’s drug problem and playing Iron Man.

I’ve gone from being convinced that I am the sole integer in the approbation of a phenomenon to realizing that I was the lead in the first of a series of movies that created a chain reaction that, if everything didn’t fire the way it was supposed to, there’s no operator, no anything. And you go, O.K., life is doing something here that included me but did not require me. But, yes, that role means a lot. Marvel is kind of like this sacred brotherhood.