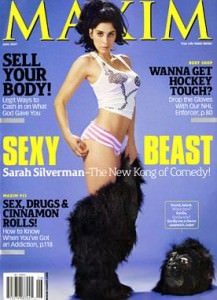 Silverman appears on the cover of the June 2007 issue of Maxim magazine. She talks about female comics not being funny and acting like one of the guys to fit in.

The boys’ club is only something I’m aware of when I’m asked about it. In the beginning, you have to prove you’re for real—like anybody else. Nobody assumes you’re funny. I played a lot of basketball in N.Y.C., and I felt the boys’ club more then. I knew I had to make every basket and not f-ck up. I’m so queer.