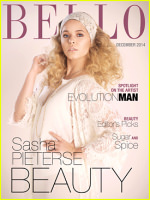 Pieterse appears on the cover of the December 2014 issue of Bello magazine. She talks about crazy moments during Pretty Little Liars.

I get to do a lot things out of the ordinary working on the show, but being buried alive is still the craziest up to date. When they first teased that moment, it was just my hand coming out of the ground, and we did several versions of it. But for the fourth season finale I was actually buried,