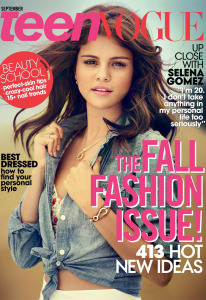 Gomez appears on the cover of the September 2012 issue of Teen Vogue magazine. She talks about acting in Monte Carlo, reading the script for Spring Breakers, and breaking out of Disney.

It’s frustrating whenever I want the roles that no one’s even thinking about me for, and being like, ‘No,’ with all these other ones. Being part of the Disney Channel was such a blessing, and I’m super happy with what my show accomplished, but acting is something I would like to take on more seriously. I don’t necessarily feel accomplished. I want to create a whole different persona when it comes to acting.