What's this? This is an unbiased just-the-facts news summary about Selena Gomez, extracted from the original article by Newslines' contributors. To see the newsline of each topic, click the links below. Learn more 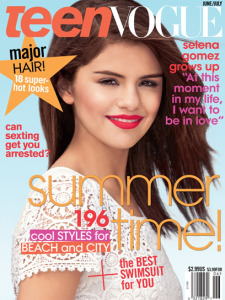 Gomez appears on the cover of the June/July 2011 issue of Teen Vogue magazine. She talks about her fans, wanting to be in love, and not being with Disney anymore.

It’s like starting over. I was trying to explain it to one of my friends, and he said, ‘You’ll be fine. People believe in you.’ But when they’re putting together a movie with Leonardo DiCaprio, I don’t think they’re going to go, ‘Selena Gomez would be great for this!’ I’m not an option. It’s humbling, having to go from this Disney high back down to having to fight for roles.