What's this? This is an unbiased just-the-facts news summary about Shia LaBeouf, extracted from the original article by Newslines' contributors. To see the newsline of each topic, click the links below. Learn more 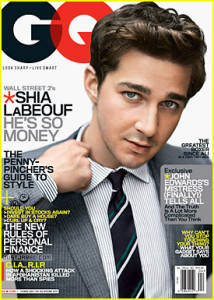 LaBeouf appears on the cover of the April 2010 issue of GQ magazine. He talks about online stock trading, his car crash, and his girlfriend Carey Mulligan.

She’s an unbelievably thought-provoking actress, the most talented actress I’ve ever met in my life, by leaps and bounds. Neither one of us are fame whores. It works out. It’s not like we’re the premiere couple; we’re not the red carpet king and queen.