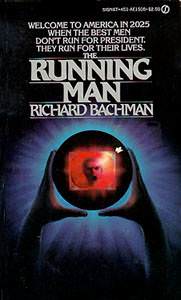 King publishes The Running Man as Richard Bachman through Signet Books. The book follows Ben Richards as he competes in a game show in which contestants are allowed to go anywhere in the world, but are followed by Hunters hired to kill them. On Nightline, King reminded an audience of the book and the film adaptation in reference to historical changes from the time it was written to how it is persevered today.

Keep in mind that I also wrote a book called The Running Man that was made into a movie with Arnold Schwarzenegger. The movie is nothing like the book. But the book ends with a passenger jet into hitting a skyscraper. And blowing the top off it. And after Sept. 11, I thought of that, and I thought, “Geez, I published that book around 1978.”