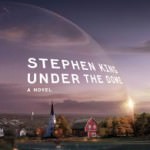 On a seemingly normal day, the small town of Chester’s Mill, Maine is encased in an indestructible dome that completely separates them from the rest of the world. King had originally gotten the idea for Under the Dome in the 1970’s, but scrapped the idea several times. After finally publishing the novel, he stated that a good idea never leaves your mind.

I thought to myself what an image that would make, the idea of the whole world watching these people who are as out of touch as people who are stranded on a desert island. They were all fun to write about, I love this book and I love the people in it.