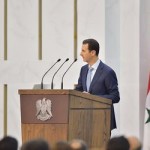 Assad says the Syrian army has been forced to give up areas in order to hold onto more important ones in its fight with insurgents, and the scale of the war means the military faces a manpower shortage.

Sometimes, in some circumstances, we are forced to give up areas to move those forces to the areas that we want to hold onto. We must define the important regions that the armed forces hold onto so it doesn’t allow the collapse of the rest of the areas…Everything is available (for the army), but there is a shortfall in human capacity, Mr Assad said. Despite that, I am not presenting a dark picture.

Assad says increased support from states backing the rebels is the reason for recent setbacks and dismisses the view that Syria is heading towards partition into areas run separately by the Damascus government and armed groups fighting him. He says amnesty for men at home and abroad who have dodged military service will encourage thousands of conscripts who want to join the army but hold back because of penalties.