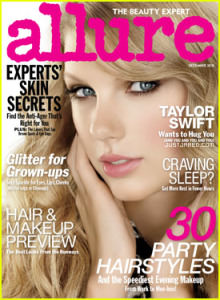 Swift appears on the cover of the December 2010 issue of Allure magazine. She talks about Justin Bieber and how she used to give bad relationship advice.

Like, the best way to get a guy to like you would be to actively ignore him. I was filled with advice! I’d tell my friends things like, Don’t accept that apology! That isn’t sincere! Or He hung out with his ex-girlfriend? Get rid of him. But love is never that simple. Now I’m finally getting the idea it’s the one thing I don’t need to have a strategy for. I can only write the material I know, which is what happens to me.