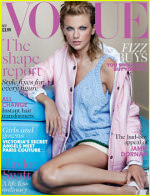 Swift appears on the cover of the November 2014 issue of British Vogue magazine. She talks about her album 1989 and her dating life.

Dating or finding someone is the last thing on my mind, because I can’t picture how it could work with the way my life is. I don’t know how a guy is supposed to walk next to his girlfriend when there are 20 men with cameras, and he can’t protect his girlfriend because that’s the life she chose. I just don’t see how it could work, so I don’t think about it, and I kind of run from it when it presents itself. ‘Cause I don’t think any guy really… They think that they would want to get to know me, and maybe date me, but I don’t think they want what comes with it.