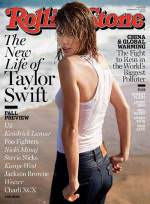 Swift appears on the cover of the second September 2014 issue of Rolling Stone magazine. She talks about her lack of privacy, her public dating life, and on 1989’s song Bad Blood.

For years, I was never sure if we were friends or not. She would come up to me at awards shows and say something and walk away, and I would think, ‘Are we friends, or did she just give me the harshest insult of my life?’ [Then last year] she did something so horrible. I was like, ‘Oh, we’re just straight-up enemies.’ And it wasn’t even about a guy! It had to do with business. She basically tried to sabotage an entire arena tour. She tried to hire a bunch of people out from under me. And I’m surprisingly non-confrontational – you would not believe how much I hate conflict. So now I have to avoid her. It’s awkward, and I don’t like it…I’m not the female police — but it broke my heart. Because I have such a high priority on girls sticking together.