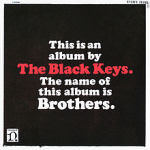 The Keys release their sixth studio album on Nonesuch Records. The album is recorded after a period of frustration when Carney learns of Auerbach’s 2009 solo album, Keep It Hid:

I was way too sensitive and was taking things personally, but the problem in the band led me to reevaluate everything.

To commemorate the release, the band performs at a pop-up store in the Housing Works Bookstore Cafe in New York City.