I wanted to have an English accent in the movie. I had created a role for Conor McGregor and after he lost to Nate Diaz, he had to go to a dark place, he had to go get his manhood back to fight the second time, so he wasn’t able to do this film at the time…I wanted this English accent to be speckled in the movie. But I also wanted someone that could do fight sequences. A lot of the UFC guys do great fight sequences in movies. You saw when I put Gina Carano in 6, and Ronda Rousey in 7. I had great experiences when putting UFC fighters in the movie, so I wanted someone that had that English accent, they talk like this, and I got Michael Bisping to come and do that.

In an interview with O’Brien on Conan, Rousey talks about how she became friends with Diesel over online gaming.

I’ve been playing Pokemon for 18 years, and that’s actually how me and Vin Diesel became friends…every night after filming we’d set up computers and like the other side of the room, and like, ‘Ok we’re going to go to this dungeon!’…I like talking to people online who have no idea who I am. 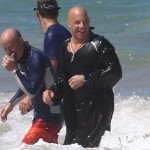 In an interview with The Daily Star, for the DVD launch of The Last Witch Hunter, Diesel says he was banned from going to the gym by his director, so that he could look more like he’d been born back in the 13th century.

I haven’t come across that in a long time. They said that I could look strong, but I could look a little bit more everyman too. I think some directors just want me to go against type – it’s how they want to play with my characters.

He also says his lifelong love of Dungeons & Dragons helped him in the role:

I’m a huge fan of Dungeons And Dragons and I even wrote the foreward for its 30th anniversary book. It’s something that was a big part of my life and it’s probably affected the way I approach making and producing movies. It played a huge part in this film; I haven’t done anything in the fantasy genre before…Well, I was raised by a mother who was an astrologer. And I believe you have to be receptive to all kinds of things and that includes the supernatural. I believe that my love of fantasy and Dungeons And Dragons allows me to be open-minded.

In an Instagram post, Diesel announces the next film in the Riddick franchise will be called Furia, and “DT” (director/screenwriter David Twohy) will start writing the movie sequel next month.  He also says a  TV show has been commissioned that will follow the bounty hunters and mercenaries in the Riddick universe.

In an interview with People magazine Diesel talks about fatherhood.

I think kids, when you’re active with your kids, you are bound to somewhat stay in shape, but I don’t know … not to sound crazy, but I don’t know how important that is. That’s not really what the most important thing in life is…When you become a father … any parent, once you have kids, anybody who has kids wakes up every day wanting to be a better parent and that’s your main focus. And you are less vain and less narcissistic and your joy comes from your children and less about you…I just told my son my favorite role in life is being ‘daddy,’ but most people would say that.

Diesel says the team behind the Fast series is in the preliminary stages of developing prequels and spinoffs. He does not say which characters would get their own standalone films, but in the past, Dwayne Johnson has hinted that he’d like to see his character, Diplomatic Security Service agent Luke Hobbs, branch out into independent adventures.

We’ve written out story lines for various characters. “We’ve been playing with it for a long time. It’s a very rich property and we’re committed to treating it with a lot of class.

Diesel says the three Fast and Furious sequels will be different in tone from the adventures that preceded them.

We have a director [F. Gary Gray] who is going to bring the darkness out and bring out the character.

They took such a high road and allowed us to honor our brother in such a powerful way. Another studio couldn’t have helped themselves by exploiting that in the plot.

Vin Diesel plays Dominic Toretto, in this crime thriller by James Wan. After Deckard (Jason Statham) starts killing the crew members, in revenge for the death of his brother, the team reunites to fight him, and discover he is trying to steal a technological device so they can turn it into a weapon. Co-starring Vin Diesel, Paul Walker and Dwayne Johnson. On performing with Walker’s brothers:

It is a very difficult thing for an actor to both mourn, and also have to pretend that the person is still there. It made the experience that much more arduous. It was very tricky. It was the hardest film I’ve ever done.

Diesel announces the name of his and Jimenez’s new daughter. Diesel revealed that his new daughters name is a tribute to the Fast and the Furious friend and co-star, Walker.

I named her Pauline. There’s no other person that I was thinking about as I was cutting this umbilical cord. I just…I knew he was there…It felt like, you know, a way to keep his memory a part of my family and a part of my world.

Diesel and Jimenez are expecting their third child together. Source:

He wants to be with his family at the birth; it’s a beautiful thing. What human being wouldn’t?

Diesel remembers Paul Walker on Live with Kelly and Michael.

When you do these action movies, you put your life on the line more than you think.

Seacrest interviews Diesel during On Air With Ryan Seacrest and questions him about his role in the film Guardians Of The Galaxy.

Can you believe even my tree has abs? I’m a flora colossus. I’m a monarch on Planet X. It is kind of cool to be challenged enough to play a character I’ve been acting all my life and I don’t think the thought ever crossed my mind that someone would ask me to play a three-word monosyllabic tree. It was kind of a cool challenge because anyone who has read the comics he actually says a lot of different things … and those who are oblivious to the nuances to his speech can hear ‘I Am Groot’.

In this space adventure, directed by James Gunn, Diesel plays Groot, a tree-like creature. who becomes a member of a group of interstellar outlaws who team up to save the galaxy from a villain who seeks ultimate power. Co-starring Chris Pratt and Bradley Cooper.

It was really an interesting exercise. I can imagine all my old acting teachers saying, ‘You want the biggest challenge in the world?’ No mannerisms, no physicality, you’re limited to these three words and that’s all you can do in all these situations and scenarios no matter what circumstances your character finds himself in, that’s all you got.

Diesel is honored with a star on the Hollywood Walk of Fame under the category of Motion Pictures. There to help present his award are Fast and the Furious co-stars Michelle Rodriguez, and Jordana Brewster.

Everyone had known me just as a bouncer in New York because I wasn’t able to get any work. There was something too ambiguous about the way I look that would prevent me from ever getting a star.

What's this? This is an unbiased just-the-facts news timeline ('newsline') about Vin Diesel, created by Newslines' contributors. Help us grow it by finding and summarising news. Learn more