Zimbabwe’s Environment minister says the country will not charge American dentist Walter Palmer for killing Cecil because he had obtained legal authority to conduct the hunt. The government says Palmer is free to visit Zimbabwe as a tourist but not as a hunter.

We approached the police and then the Prosecutor General, and it turned out that Palmer came to Zimbabwe because all the papers were in order. Palmer returns to work at his dental practice. He says nothing to the media. A small group of protesters is present.

In his first interview, Palmer says he will return to work after Labor Day,

I have a lot of staff members, and I’m a little heartbroken at the disruption in their lives. And I’m a health professional. I need to get back to my staff and my patients, and they want me back. That’s why I’m back.

He claims he has not been in hiding.

I’ve been out of the public eye seeing family and friends. This has been especially hard on my wife and my daughter. They’ve been threatened in the social media, and again … I don’t understand that level of humanity to come after people not involved at all.

He also says he would not have killed Cecil if he had known more:

If I had known this lion had a name and was important to the country or a study, obviously I wouldn’t have taken it. Nobody in our hunting party knew before or after the name of this lion. Palmer is spotted in Eden Prairie near his Minnesota home, the first time he has been seen since the killing of Cecil. His dentist office has re-opened but he has not been to the building.

One of Cecil’s cubs dies after being attacked by another lion. Park official:

One of the eight cubs was killed by a male lion after Cecil was killed. The lionesses fended off his advances but it is unlikely they can continue to protect the cubs for much longer. 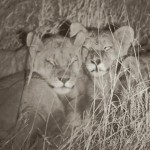 Cecil’s cubs are pictured. They are being taken care of by Jericho, Cecil’s uncle. Palmer’s Marco Island, FL, vacation home is vandalized with the the garage door spray painted with the words ‘Lion killer!’ and a handful of orange pig’s feet scattered across the front of the house. Palmer si not at the home and is still in hiding.

American, Delta, and United ban the transport of lion, leopard, elephant, rhino or buffalo, animals known in Africa as the “big five”, because they are the hardest to kill on foot. Delta, the only American airline to fly directly between the United States and Johannesburg, will also review policies on accepting other hunting trophies with government agencies and other organizations that support legal shipments.

Following the outrage over the killing of Cecil the Lion by Palmer, Zimbabwe bans the hunting of lions, leopards and elephants in the area frequently used by hunters. Bow and arrow hunts are also suspended unless hunters are approved by the National Parks and Wildlife Authority. The Safari Operators Association of Zimbabwe stands to lose business $40 million a year from a ban.

Muchinguri, Zimbabwe’s environment minister, says the process to extradite Palmer from the United States is underway.

Unfortunately, it was too late to apprehend the foreign poacher as he had already absconded to his country of origin. We are appealing to the responsible authorities for his extradition to Zimbabwe so that he be made accountable. This must be condemned in the strongest possible terms by all genuine, animal-loving conservationists who believe in sustainable utilization of natural resources.

She also says Palmer’s use of a crossbow and arrow to shoot the lion before he was eventually shot and killed with a gun had breached Zimbabwe’s hunting rules.

A White House petition (link) garners over 160,000 signatures — meeting the threshold for the Obama administration to respond.

Farrow quickly deletes the address and amends the tweet to show a picture instead of his dental practice in Bloomington, Minneapolis.

Bronkhorst, the guide, says that after killing Cedric, Palmer wanted to hunt an elephant:

We then went back to my place near Hwange. The client asked if we would find him an elephant [whose tusk weighs] larger than 63 pounds, which is a very large elephant, but I told him I would not be able to find one so big, so the client left the next day and went to Bulawayo for the night and then flew out [to Johannesburg] midday the following day.

He also describes the events of Cedric’s hunt:

We set off quite late, with the sun down, and found the carcass of an elephant which we dragged and moved into the long grass and used for bait,” he said. “We then established the ‘tree blind’ [a camouflaged hide made of tree branches and grass]…Once we were established, and it was quiet, we first saw a lioness go past. And then a huge male – Cecil – came into view behind her. He was a magnificent animal…The client then fired using a bow and arrow, and it went away into the long grass. This was about 10 pm…We found it and it was wounded, and the client then shot it, with his bow and arrow, and killed it

He says the hunting party was “devastated” to discover that Cecil was wearing a GPS collar. But instead of turning it in to authorities, Bronkhorst says he panicked, taking the tracking device off and putting it in a tree.

I wish I had taken the collar.

The U.S. Fish and Wildlife Service announces it is investigating Cecil’s killing.

We're investigating the killing of #CecilTheLion. Will go where facts lead. We ask Dr. Palmer or his rep to contact USFWS immediately.

Ethics are certainly against baiting. Animals are supposed to be given a chance of a fair chase. In fact, it was not a hunt at all. The animal was baited and that is not how we do it. It is not allowed.

The proceedings are delayed because prosecutors are “making their assessments”. If convicted, the men face up to 15 years in prison in Zimbabwe. Later Bronkhurst is released on a $1000 bond. Palmer apologizes to his customers for having to close his dental practice. The practice has become a memorial to the lion, with red roses and more than a dozen stuffed animals laid outside the locked front door.

To my valued patients: As you may have already heard, I have been in the news over the last few days for reasons that have nothing to do with my profession or the care I provide for you. I want you to know of this situation and my involvement. In addition to spending time with my family, one of my passions outside dentistry is hunting. I’ve been a life-long hunter since I was a child growing up in North Dakota. I don’t often talk about hunting with my patients because it can be a divisive and emotionally charged topic. I understand and respect that not everyone shares the same views on hunting.

Again, I deeply regret that my pursuit of an activity I love and practice responsibly and legally resulted in the taking of this lion. That was never my intention. The media interest in this matter – along with a substantial number of comments and calls from people who are angered by this situation and by the practice of hunting in general – has disrupted our business and our ability to see our patients. For that disruption, I apologize profoundly for this inconvenience and promise you that we will do our best to resume normal operations as soon as possible.

Osbourne reacts to killing of Cecil the Lion by Palmer:

I hope that #WalterPalmer loses his home, his practice & his money. He has already lost his soul…

Palmer issues a statement saying his hunt was legal and that he will assist authorities:

In early July, I was in Zimbabwe on a bow hunting trip for big game. I hired several professional guides and they secured all proper permits. To my knowledge, everything about this trip was legal and properly handled and conducted. I had no idea that the lion I took was a known, local favorite, was collared and part of a study until the end of the hunt. I relied on the expertise of my local professional guides to ensure a legal hunt. I have not been contacted by authorities in Zimbabwe or in the U.S. about this situation, but will assist them in any inquiries they may have. Again, I deeply regret that my pursuit of an activity I love and practice responsibly and legally resulted in the taking of this lion.

PETA releases a statement about the killing of Cecil the lion. Newkirk:

Hunting is a coward’s pastime. If, as has been reported, this dentist and his guides lured Cecil out of the park with food so as to shoot him on private property, because shooting him in the park would have been illegal, he needs to be extradited, charged, and, preferably, hanged.  To get a thrill at the cost of a life, this man gunned down a beloved lion, Cecil with a high-powered weapon. All wild animals are beloved by their own mates and infants, but to hunters like this overblown, over-privileged little man, who lack empathy, understanding, and respect for living creatures, they are merely targets to kill, decapitate, and hang up on a wall as a trophy. The photograph of this dentist, smiling over the corpse of another animal, who, like Cecil, wanted only to be left in peace, will disgust every caring soul in the world.

Zimbabwean authorities say that Palmer, a Minnesota dentist, is responsible for slaying Cecil, a protected lion. Palmer paid at least $50,000 to track and kill the animal. Palmer faces charges of poaching. The conservation group alleges that Palmer worked with the guides to lure Cecil from the national park to an unprotected area by strapping a “dead animal to their vehicle.”

Zimbabwean authorities are trying to find the hunter who killed Cecil. The 13-year old lion was found headless after being shot with a bow and arrow. Hunters then tracked the dying animal for 40 hours before they killed it with a rifle. Bait, in the form of a freshly killed animal, was used to tempt Cecil out of the park, a technique commonly used so that hunters can “legally” kill protected lions.

Cecil’s death is a tragedy, not only because he was a symbol of Zimbabwe but because now we have to give up for dead his six cubs, as a new male won’t allow them to live so as to encourage Cecil’s three females to mate. The two people who accompanied the hunter have been arrested but we haven’t yet tracked down the hunter, who is Spanish.

Palmer is part of a group of people who kill a black bear in Wisconsin, 40 miles outside area allowed in their permit. He is fined $3,000 and given a year’s probation after pleading guilty.

Tammy Brevik receives a $127,500 settlement after she sues Palmer, claiming he sexually harassed her when she worked for for him in his Minneapolis dental practice from 1999 to 2005.

I believe my sex was a factor… in that many of Dr Palmer’s comments concerned my breasts, buttocks and genitalia. I also believe that my termination was in retaliation for reporting the conduct because I was terminated the day my lawyer contacted Dr Palmer regarding the harassment.

Palmer denies any wrongdoing but agrees to the payment. He is ordered to take a jurisprudence exam and complete an ethics course.

What's this? This is an unbiased just-the-facts news timeline ('newsline') about Walter James Palmer, created by Newslines' contributors. Help us grow it by finding and summarising news. Learn more