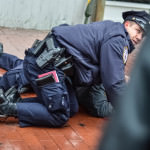 Williams publishes photos he took before and during the attack. He was initially posing the four police academy graduates for a shot when Thompson charged them, and continued to shoot as the attack took place. The shots show the wounds to the back of Healey’s head, and Thompson’s body after he has apparently been shot. Williams:

I was just in that mode. When I heard the shots fired, it kind of woke me up. I was scared, but I knew the moment had to be captured. 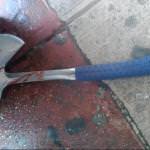 Photos show authorities inspecting the crime scene, and the weapon used in the attack.

NYPD Commissioner Bratton says the officers were recent graduates of the Police Academy assigned to 103rd Precinct in Jamaica, Queens. They were at the intersection of 162nd Street and Jamaica Ave. when the attack took place. Bratton:

Kraft is reported to have been struck in the head and Meeker was struck in the arm. Kraft was in surgery Thursday night while Meeker was examined and released. The report doesn’t mention Healey. A 29-year-old female bystander was also struck by a bullet fired by the police, as two officers opened fire and shot Thompson dead at the scene. The bystander underwent surgery at Jamaica Hospital, where she’s recovering.

Law enforcement officials say that despite initial concerns over jihad ideology, social media postings and interviews with people who knew Thompson indicate that he was a disturbed loner angry over what he said was oppression of black Americans in the U.S. He is reported to have been arrested several times in California, including multiple times for assault and domestic violence, state officials say. A photo apparently shows James being aided by a police officer near the scene of the attack.

Thompson’s computer is confiscated for investigation following the attack. Police officer familiar with his postings:

He’s very angry. He’s ranting about America, more racially than anything else.

A picture is found on the computer of Thompson wearing a keffiyeh, and a disturbing conversation with a Facebook friend. Source:

He says American needs to be punished, from within, and he talks about Middle East issues. He says American is oppressing people overseas and that its military is too strong.

In other conversations his ideology sounds more race-based than derived from Islamism:

[He] seems more like a throwback to the anger of the 70s. He says that if there’s going to be change, American blacks need to make the changes. He talks more about revolution than jihad.

James is identified as the bystander who was shot. She is reported to have been standing half a block away at the time of the attack. She is recovering at Jamaica Hospital from surgery to remove the bullet from her lower back. A report says there is a risk she is paralyzed.

Navy personnel records show Thompson enlisted in February 2001 as a builder constructionman, leaving the service ranked as an E-2 two years later. CNN reports that he received a dishonorable discharge for misconduct. He was assigned to Naval Mobile Construction Battalion 4 and Naval Construction Group 1, both based at Port Hueneme, Calif.

CNN reports that Thompson’s Facebook profile picture, previously reported to be an Islamist warrior, is a self-portrait. The black-and-white photo is said to show Thompson himself wearing a keffiyeh, the checkered scarf worn as a symbol of Intifada or holy resistance in Palestine and also used as a symbol of revolution and of heritage, and armed with a sword, spear, and rifle. The profile page’s banner picture is a verse in classic Arabic warning of judgement for people who have gone astray. Law enforcement sources say Thompson had ties to a radical leader who has advocated violence. His Facebook profile apparently shows an Islamist fighter as the profile picture. Comment on a Youtube video:

If you’re looking for ‘perfect’ Muslims who never make any mistakes in their Jihad, then you will be looking in vain! If the Zionists and the Crusaders had never invaded and colonized the Islamic lands after WW1, then there would be no need for Jihad! Which is better, to sit around and do nothing, or to Jihad fisabeelallah!

The FBI is looking into whether the hatchet attack is an act of terrorism. FBI:

Surveillance video is said to show the man wielding the 18.5-inch hatchet. The exact moment of the attack isn’t shown:

Police sources tentatively identify the attacker as Zale Thompson, a 32-year-old man with a Facebook page containing images of what appears to be a Muslim warrior and prayers. Authorities have found no links to extremist literature or jihadi groups at the time.

The man, as yet unidentified, is reported to walk up to the group of police officers who are posing for a photo in Jamaica, Queens, around 2 p.m. Eastern. He attacks without warning, slashing Officer Healey in the head with the hatchet. The man is shot dead at the scene by another officer. Witness:

Healey is taken to Jamaica Hospital Center for surgery.