Conservative members of Parliament prepared to do battle by taking down flagpoles and sharpening them into spears while Harper hid inside a nearby cabinet. Member of parliament:

These guys were up there holding these spears ready to impale anyone who came in. It was that or get mowed down. Witness Barbara Winters describes Cirillo’s final moments and what she said to him as she assisted him:

You are loved. Your family loves you. You’re a good man

Police collect Zehaf-Bibeau’s belongings from the Ottawa Mission shelter. He had stayed there for between one and two weeks, and befriended two other men and they had been trying to track down a vehicle. He often told them about Islam. A resident says he told people they should be praying five times a day:

Because the end of the world is coming

Harper says Canada will expedite powers of detention and surveillance following the shooting. He tells the House of Commons:

They need to be much strengthened, and I assure you, Mr. Speaker, that work which is already under way will be expedited.

The Globe & Mail hears from sources that Zehaf-Bibeau was designated a high-risk traveler.

Shooter: Sources tell Globe and Mail that he was recently designated “high-risk traveler” and government seized his passport

The Canadian government says there is no evidence at this stage of ties between Zehaf-Bibeau and extremist ideology, but notes that it is still early in the investigation.

In a national address, Harper calls the incident the country’s second terrorist attack in three days.

This week’s events are a grim reminder that Canada is not immune to the types of terrorist attacks we have seen elsewhere…We will not be intimidated. Canada will never be intimidated…In the days to come we will learn about the terrorist and any accomplices he may have had

The gunman killed by Vickers is identified as Michael Zehaf-Bibeau by various news agencies, quoting intelligence officials. Zehaf-Bibeau, who reportedly converted to Islam, has been brought to US agencies’ attentions, according to two American officials. One of the officials said that the man was from Quebec.

Police did not directly answer questions from reporters about the possibility that another shooter – or shooters – were still at large.

BREAKING | This is a photo of Michael Zehaf-Bibeau, gunman in this morning's shootings in Ottawa. #cbcOTT #OTTnews pic.twitter.com/OLSxlYPelj

Canadian broadcaster CBC reported that Bibeau had a record of drug arrests going back 10 years.

The soldier who died is identified by his aunt as as 24-year-old Corporal Nathan Cirillo. She tells the Globe and Mail he was training to join the Canada Border Services Agency.

Obama condemns the shootings in Canada, saying the motive for the shootings remained unknown, but that as more becomes known, that information will be factored into U.S. security considerations.

[They are] outrageous attacks. We’re all shaken by it.

We have to remain vigilant.

A counter-terror source says ISIS-related chatter spiked in the five days leading up to the shooting, focusing on Canada’s coalition role. Translated tweet:

Condolences to family of the soldier killed, & prayers for the Parliamentary guard wounded. Canada will not be terrorized or intimidated.

Two other patients are stable. Once with a gunshot wound, the other with other injuries.

One gunman is shot and killed just outside the MPs caucus rooms, by Vickers, the House of Commons Sergeant-at-Arms. One guard is shot in the leg. Another gunman is reportedly still at large.

The gunman drives away from the war monument, and heads to the Parliament buildings on Parliament Hill. Witnesses say his face is covered in a scarf or mask. He enters Canada’s Parliament. At least 30 shots are fired in an exchange of fire with guards.

Police in bulletproof vests and automatic weapons surround the streets near Parliament, telling people to clear the area, shouting:

We do not have the suspect in custody. You are in danger here.

All cell phones in the area are blocked. Members of Parliament are told to lock themselves in their offices, and stay away from the windows: Security Alert:

If your door does not lock, find a way to barricade the door, if possible. Do not open a door under any circumstances. 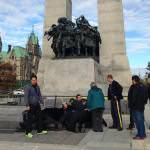 A gunman shoots and wounds a soldier, a reservist, serving in Hamilton, from the Argyll and Sutherland Highlanders, at Ottawa’s War Memorial. Witnesses describe a man pulls up in a car in front of the monument just before 10am, gets out with a rifle and starts firing shots at the soldiers standing guard. About five or six shots were fired. One soldier is hit on the steps at the foot of the Cenotaph. Bystanders and paramedics provided emergency medical care. The soldier, believed to be a man in his 30s, was taken to Ottawa Civic Hospital by ambulance suffering from gunshots to his abdomen. Medical personnel are seen giving him cardio-pulmonary resuscitation.

Zehaf-Bibeau is reported to be a recent convert to Islam.