Mueller’s parents say they were informed by government officials that their daughter was repeatedly raped by Baghdadi. American officials allegedly learned about Kayla’s abuse, after interviewing two Yazidi girls, 16 and 18, who escaped from the same compound where they were all held as sex slaves. The girls said Kayla was held in the home of Abu Sayyaf, a Tunisian man in charge of ISIS’ oil and gas revenue. Sayyaf’s wife, Umm Sayyaf, who was captured in a U.S. raid on the compound confirmed the information. Baghdadi is said to have regularly visited the house to both speak to Sayyaf and rape Kayla. The information discredits reports that Mueller warmed to her captors and had even willingly married a member of the state. 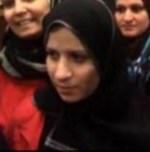 One of Al-Baghdadi’s wives, believed to be hairdresser Al-Dulaimi, is detained by the Lebanese military while trying to leave Syria with her daughter, using false passports. DNA tests are reported to confirm that Al-Baghdadi is the child’s father. The woman is being questioned by Lebanese authorities, and it is unclear if she will be used as a bargaining chip to negotiate with ISIS for the release of captives.

Al Baghdadi gives the order via an affiliated website to start minting gold, silver and copper coins for the Islamic dinar, to ‘change the tyrannical monetary system’ modeled on Western economies that ‘enslaved Muslims.’ Photos of coin prototypes show that they are printed with the words in Arabic:

The Islamic State / A Caliphate Based on the Doctrine of the Prophet.

It’s unclear where ISIS intends to get the gold, silver and copper. The Islamic dinar’s purchasing power is its weight in gold, silver or copper. One gold coin has a map of the world, indicating that Islam will rule the world. A silver coin has a picture of the Al Aqsa mosque in Jerusalem, where Mohammed prayed, and the gold-topped Dome of the Rock, from which Muslims believe that he ascended into heaven. Other coins feature designs that are significant in Islam.

The Pentagon says it is considering modest numbers of ground troops to fight alongside Iraqi forces. Joint Chiefs chairman Dempsey to the House Armed Services Committee:

I’m not predicting at this point that I would recommend that those forces in Mosul and along the border would need to be accompanied by U.S. forces, but we’re certainly considering it

The statement comes after Baghdadi releases an audio recording saying that the air campaign has failed.

A 17-minute recording apparently of Baghdadi’s voice is released, his first public statement since U.S. airstrikes began against ISIS, and comes six days after he was reported to have been injured in a strike. Baghdadi is said to vow that ISIS will resist the ‘crusader campaign,’ and calls for ‘volcanoes of jihad,’ while saying that the group prefers death to humiliation of defeat or surrender. Recording:

Paula Kassig tweets the message to several accounts believed to be associated with Al-Baghdadi:

A Letter from Abdul-Rahman Kassig's Mother to IS Caliph Al Baghdadi pic.twitter.com/QUXTXluVnY

The Iraqi military confirms that al-Baghdadi’s top aide, Abu Hajar al-Souri, has been killed in an airstrike in Mosul. It says that the head of ISIS’s military council in the city of Tal Afar, Abu Alaa al-Iraqi, has also been killed in air operations in Mosul.

Steven Sotloff’s family says ISIS has violated many tenets of Islam by killing him. Family spokesman Barak Barfi accuses the group of the Arabic concept of a ‘great sin’:

I have a message for Abu Bakr al-Baghdadi. Where is your mercy? Wayluk.

He cites several Quran passages and says ISIS has violated them:

I am here debating you with kindness. I don’t have a sword in my hand, and I am ready for your answer.

Nidal Hasan, the Army psychiatrist who killed 13 people in the 2009 Fort Hood shootings, sends a letter to Abu Bakr al-Baghdadi asking to be made a ‘citizen soldier’ of the self-described caliphate:

I formally and humbly request to be made a citizen of the Islamic State … It would be an honor for any believer to be an obedient citizen soldier to a people and its leader who don’t compromise the religion of All-Mighty Allah to get along with the disbelievers.

Shirley Sotloff issues a video plea to Al-Baghdadi on the New York Times website to release her journalist son, Steven, held by ISIS since 2013:

You, the caliph, can grant amnesty. I ask you please to release my child. I ask you to use your authority to spare his life.

She says Steven is an ‘innocent’ journalist who has no control over the U.S. government’s policies:

As a mother, I ask your justice to be merciful and not punish my son for matters he has no control over.

She says he has been studying Islam since his capture:

I ask you to use your authority to spare his life and to follow the example set by the Prophet Muhammad, who protected People of the Book [Jews and Christans]. ISIS’s propaganda arm, Al-Hayat Media Center, publishes the fifth edition of the group’s weekly magazine, retitled Dabiq and expanded to 50 pages from eight. The magazine includes an editorial explaining the changes in layout, saying it has decided to focus on the concepts of monotheism, receiving knowledge, pilgrimage, holy war and Islamic society:

After a review of some of the comments received on the first issues of Islamic State News and Islamic State Report, AlHayat Media Center decided to carry on the effort – in sha’allah – into a periodical magazine focusing on issues of tawhid, manhaj, hijrah, jihad, jama’ah.

The name of the new magazine refers to the area of Dabiq in the northern countryside of Aleppo, which the group says will be the site of an apocalyptic battle between Islam and the Western ‘crusaders’:

[…] Allah’s messenger said, ‘The Hour will not be established until the Romans land at al-Amaq or Dabiq … then an army from al-Madinah of the best people on the earth at that time will leave for them.’

The lead story focuses on ISIS’s declaration of the new Islamic Caliphate on the first day of Ramadan, including excerpts of speeches by the group’s leaders. Speech by Al-Baghdadi:

O Muslims everywhere, glad tidings to you and expect good. Raise your heads high, for today – by Allah’s grace – you have a state and Khilafah, which will return your dignity, might, rights, and leadership … Therefore, rush O Muslims to your state. Rush, because Syria is not for the Syrians, and Iraq is not for the Iraqis. The earth is Allah’s.

It reports on what it says are efforts by ISIS to build relations with tribal assemblies in Aleppo as part of efforts to establish the caliphate. Other sections include graphic photos of what it says are government atrocities in Nineveh including execution of Sunnis as the Iraqi security forces retreated from ISIS’s advance on Mosul. The second part of the magazine focuses on a lengthy analysis of the concept of imamah (Islamic leadership). The news section focuses on successful ISIS military campaigns and what it says are conversions to the group’s ideology in territories it has captured in Kirkuk, Diyala, Salahuddin and Anbar.

The magazine’s back page expounds further on the apocalyptic events to take place in Dabiq, including a hadith stating that the caliphate will conquer Constantinople (Istanbul), before returning to Sham (the Levant) and defeating the devil in battle.

A video showing someone who is thought to be the leader of the Islamic State extremist group delivering a sermon at a mosque in Mosul is posted online.  Al-Baghdadi is rarely seen in public, with only a few photographs of him in existence.  Although the video appears on a site that is connected to the group, there has been no official verification of whether or not he is the one in the video.

Al-Baghdadi says in a recruiting video for ISIS that the self-declared caliphate, now known as Islamic State, will defeat the Vatican and conquer the globe.

Rush O Muslims to your state. It is your state. Syria is not for Syrians and Iraq is not for Iraqis. The land is for the Muslims, all Muslims. This is my advice to you. If you hold to it you will conquer Rome and own the world, if Allah wills.

ISIS declares itself a Caliphate, calling on other factions to pledge allegiance in a statement posted on jihadist websites. The group says that it has renamed itself Islamic State to reflect its new status. Spokesman Abu Muhammad al-Adnani declares ISIS leader Abu Bakr Al-Baghdadi the head of the Islamic world:

He is the imam and khalifah (Caliph) for the Muslims everywhere.

We spent how many missions and how many soldiers were put at risk when we caught this guy and we just released him.

Al-Baghdadi is not viewed as a threat upon release: