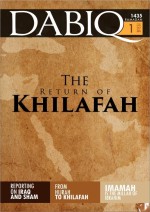 ISIS’s propaganda arm, Al-Hayat Media Center, publishes the fifth edition of the group’s weekly magazine, retitled Dabiq and expanded to 50 pages from eight. The magazine includes an editorial explaining the changes in layout, saying it has decided to focus on the concepts of monotheism, receiving knowledge, pilgrimage, holy war and Islamic society:

After a review of some of the comments received on the first issues of Islamic State News and Islamic State Report, AlHayat Media Center decided to carry on the effort – in sha’allah – into a periodical magazine focusing on issues of tawhid, manhaj, hijrah, jihad, jama’ah.

The name of the new magazine refers to the area of Dabiq in the northern countryside of Aleppo, which the group says will be the site of an apocalyptic battle between Islam and the Western ‘crusaders’:

[…] Allah’s messenger said, ‘The Hour will not be established until the Romans land at al-Amaq or Dabiq … then an army from al-Madinah of the best people on the earth at that time will leave for them.’

The lead story focuses on ISIS’s declaration of the new Islamic Caliphate on the first day of Ramadan, including excerpts of speeches by the group’s leaders. Speech by Al-Baghdadi:

O Muslims everywhere, glad tidings to you and expect good. Raise your heads high, for today – by Allah’s grace – you have a state and Khilafah, which will return your dignity, might, rights, and leadership … Therefore, rush O Muslims to your state. Rush, because Syria is not for the Syrians, and Iraq is not for the Iraqis. The earth is Allah’s.

It reports on what it says are efforts by ISIS to build relations with tribal assemblies in Aleppo as part of efforts to establish the caliphate. Other sections include graphic photos of what it says are government atrocities in Nineveh including execution of Sunnis as the Iraqi security forces retreated from ISIS’s advance on Mosul. The second part of the magazine focuses on a lengthy analysis of the concept of imamah (Islamic leadership). The news section focuses on successful ISIS military campaigns and what it says are conversions to the group’s ideology in territories it has captured in Kirkuk, Diyala, Salahuddin and Anbar.

The magazine’s back page expounds further on the apocalyptic events to take place in Dabiq, including a hadith stating that the caliphate will conquer Constantinople (Istanbul), before returning to Sham (the Levant) and defeating the devil in battle. ISIS propaganda wing Al-Hayat Media Center publishes the fourth edition of the Islamic State magazine (pdf here). Expanded to eight pages from six and retitled IS Report, the publication leads with a feature titled ‘Smashing The Borders of the Rebels’ and a cover photo showing militants freely crossing the Syria-Iraq border. The subtitle – ‘The Battle of Asadullah Al-Bilawi’ – is an apparent reference to the group’s operation to take control of Mosul, named after a now-deceased ISIS commander. The cover story focuses on in-depth analysis of the historical background of regional geopolitics, including the Sykes-Picot agreement which determined the borders of modern-day Iraq and Syria. It says the group took control of the border region between Nineveh province in Iraq and al-Barakah province in Syria, demolishing ‘artificial barriers’ set up as ‘crusader partitions’ by the Western powers in an effort to restore the Islamic caliphate:

Last week, the mujahidin of the Islamic State of Iraq and Sham reached yet another signicant milestone on the path to restoring the prophetic khilafah.

It says it executed 1,700 Iraqi soldiers in the battle for Mosul, and includes a photo feature apparently showing the men being marched to their deaths. It states that Iraqi President Maliki’s ‘tyrannical strength is no match for pious believers,’ and urges readers to join the cause:

It celebrates the group’s seizure of the Koniko gas field in Deir Ezzor with a photo feature showing closeups of a black-clad fighter firing an assault rifle. Also shown are executions in the province of three men – one is said to be an Assad sympathizer, and a second is said to have enlisted in the Nusayri (Alawite) army, an apparent reference to the regime’s armed forces, after ISIS declared its jihad in the area. Details are not given of the third man the group says it executed. Two men said to have broken the hadd – Islamic prohibition – against stealing receive an unspecified punishment that it says is ‘carried out under the supervision of trained doctors.’ The final section of the magazine focuses on humanitarian and religious activities in Homs and Diyala, including handing out fliers and improving security for shepherds and farmers. 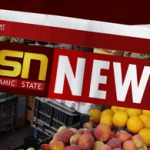 ISIS publishes the second edition of Islamic State News magazine via its affiliate, Al-Hayat Media Centre. The issue leads with a photo feature on trade apparently flourishing in the Aleppo (Halab) market under ISIS control, with pictures of fresh fruit, cured meat, and flowers for sale. It includes photos of the implementation of a hadd – religious prohibition – against alcohol, and a graphic execution of an Assad shabeeh (loyalist) in Aleppo. Also shown are bloodsoaked bodies in the aftermath of what it says is fighting in Ar-Rawiyah village in Raqa area against the Kurdish Workers Party (PKK) and People’s Protection Units (YPG), an armed group from Syrian Kurdistan. The aftermath is shown of what ISIS says are victories in Malahimah, Anbar province, and other parts of the country. It includes photos apparently showing the conversion of captured opposition fighters in Anbar, and the execution of those who refuse to ‘repent.’ A feature on the group’s operation to retake al-Khair, as the group refers to Deir Ezzor province:

Allah facilitated for his mujahid slaves the liberation of two towns, as-Sabhah and al-Bareehah, so that they are now overlooking one of the biggest strongholds of the Sahwat [Sunni tribes]: the town of al-Busayrah where battles are taking place now. Allah also bestowed upon us much war booty in the battle of as-Sabhah, which included: a tank, a BMB, three sniper guns, a 12.5mm cannon, a 14.5mm dual-barrel anti-aircraft [gun], a number of Kalashnikov rifles, a car full of ammo, and a number of other cars.

What's this? This is an unbiased just-the-facts news timeline ('newsline') about Al-Hayat Media Center, created by Newslines' contributors. Help us grow it by finding and summarising news. Learn more