What's this? This is an unbiased just-the-facts news summary about Amber Heard, Flare Magazine, extracted from the original article by Newslines' contributors. To see the newsline of each topic, click the links below. Learn more 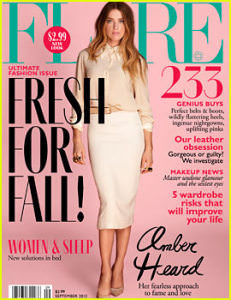 Heard appears on the cover of the September 2013 issue of Flare magazine. She talks about keeping her relationship with Johnny Depp private, her film Paranoia, and how she chooses a role.

[The script] doesn’t say that these characters are ‘sexy.’ I’m not picking them because of that. I take roles that are interesting, and scripts that have female characters with depth.