In this comedy, directed by Graham Annable and Anthony Stacchi, Kingsley plays Archibald Snatcher. Snatcher is an evil exterminator who is planning to defeat the subterranean trolls. Meanwhile the trolls are going to fight back with the help of Eggs, their new friend. Co-starring Jared Harris and Nick Frost.

Archibald Snatcher is desperate to wear a white hat and eat cheese with the greatest in the city. Those who run the world wear white hats and eat special cheese. And he wants to join this club that constantly, constantly rejects him, until he finds a way of blackmailing them into saying, “Okay, this town’s about to be overrun and destroyed’ — It could be called a pre-emptive strike, actually.

Disney announces that Kingsley has been cast as the voice of the black panther, Bagheera, in the live-action film The Jungle Book. The movie is slated to be released in 2015. 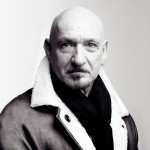 Kingsley gives an interview to The Talks. He discusses what being a sir means to him, being in front of the camera, and why he got a chicken.

I like the sound. I’ve got quite a lot of land at home in the Oxfordshire countryside. She is wired off so the foxes can’t get her and I like the sound. She is a very sweet little animal. She is really nice, quite a developed personality. She gets very exited when I walk up to her, she starts running up and down.

Kingsley is honored with a star on the Hollywood Walk of Fame under the category of Motion Pictures. Special guests at the induction ceremony include Bruce Willis and Jerry Bruckheimer.

Standing here today amongst you is one of the many things I thought growing up in England that would never happen to me.

This film was dedicated to Pandit Nehru, Lord Mountbatten of Burma, and Motilal Kothari, all men of great vision and courage. It was made by my friend Sir Richard Attenborough, another great man of vision and courage. And for all the men and women who worked on the film, this is an Oscar for vision, for courage, and for acting and for peace. Thank you.

What's this? This is an unbiased just-the-facts news timeline ('newsline') about Ben Kingsley, created by Newslines' contributors. Help us grow it by finding and summarising news. Learn more