I Am Not Vester Flanagan’s Accomplice 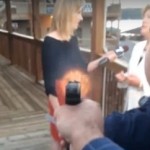 Today I was accused of being an accomplice in the Vester Flanagan shooting. This morning around 6:45, Flanagan killed Alison Parker and Adam West while they were conducting a live TV report in Moneta, Virginia.

The news that I was an accomplice came as quite a shock because I was not in Moneta at the time. In fact I’ve never been there. I also have never met Flanagan, which would make it impossible for me to help him with the planning of the crime, or to help him in carrying it out. As far as I know, he carried out the crime alone. I didn’t sell him the gun, nor did I write to him to tell him to target the victims. I didn’t drive the getaway car.

But still, despite all of this, I was labelled as an accomplice. Not by the police, but by Jeff Jarvis, a well-known media blogger and professor and director of the Tow-Knight Center for Entrepreneurial Journalism at the City University of New York’s Graduate School of Journalism.

Media: If you show the shooter's video, you will only inspire more to get attention by doing the same. Do not be his accomplice.

According to Jarvis, I am Flanagan’s accomplice because I showed his video on my site. By this logic I’m also helping ISIS and Bill Cosby. I am also helping Taylor Swift and El Chapo get free publicity too. I wonder if I should ask them for royalties.

The idea that media causes violence is a well-worn trope. Even if it can be shown that Flanagan wanted fame, rather than just a record of his act, showing the video will not encourage others to follow. People have wanted fame since before the newspaper existed. Many conflicts have been started with fame in mind throughout history. Adding an extra moral judgement that the media actually encourages violent acts is to put the cart before the horse. It’s a call to censorship and control.

As a professor of journalism, Jarvis should know better than to teach his students to self-censor their reporting. The reporter’s job is to show the best and the worst of the world. Their job is to report what happened today, and let readers make up their own mind up about what it means.

Basic news reporting (as opposed to opinion pieces) should be dispassionate, reporting factually what happened. That doesn’t mean that we don’t care about the victims or their families, but our concern is with letting people know what happened.

As it stands, hundreds of media are currently showing the videos — it’s not a heroic act, it’s just what news people do. I’m no accomplice. The shooter made his own decisions. If you want to see what he did it’s up to you.

Our newsline of Vester Flanagan is here.