What's this? This is an unbiased just-the-facts news summary about Bobbi Kristina Brown, extracted from the original article by Newslines' contributors. To see the newsline of each topic, click the links below. Learn more 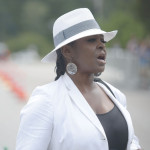 The fued between family members on Bobbi Kristina’s mother’s and father’s sides continues during the funeral when her father’s sister leaves the service to talk with reporters. She says she is angry because Houston’s sister in law is speaking at the funeral.

It went wonderful until Pat started speaking, and I didn’t like that. I told her that Whitney is going to haunt her from the grave. [This dispute] is going to be a long, drawn-out thing. Trust me. It’s not over.