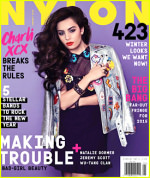 XCX appears on the cover of the December 2014/January 2015 issue of Nylon magazine. She talks about feminism, her confidence, and expressing herself.

There’s a video of me dancing to the Spice Girls with one of those toy microphones when I was, like, four, maybe younger. It’s a classic home video – my dad comes into the frame, and he’s doing high kicks and stuff. It still exists, but nowhere online, thankfully.