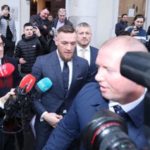 McGregor pleads guilty to disorderly conduct in a deal with prosecutors to avoid jail time from his assault on a bus in April 2018. McGregor had faced charges of included menacing, assault resulting in injury, reckless endangerment and criminal mischief. As part of his deal he is required to undergo anger management treatment. McGregor was also required to pay full restitution to the bus company, which he has already fulfilled. The plea will not affect his US work visa.

I just want to say I’m thankful to the DA [District Attorney] and the judge for allowing me to move forward. I want to say to my friends, my family, my fans: thank you for the support.

McGregor is fined £350 for driving at 98mph in a 60mph zone. McGregor had initially been reprimanded by Judge Walsh for not appearing on time, the third time he had failed to show. Walsh:

I have to ask you the question… how much to you earn? Please don’t tell me you earn more than €110 million in a day?

€140 million…I got the fixed charge notice and attempted to pay it…It didn’t pay and that’s it.

That’s not it…I would warn, however, despite your fortune in life, that you take cognisance of other people on the roads.

McGregor is given the option to pay the fine in installments.

The Nevada State Athletic Commission votes to allow the McGregor-Mayweather fight to take place using 8-ounce gloves — a first of its kind in boxing. McGregor believes the drop in glove size is to his advantage:

I am very pleased with the Nevada State Athletic Commission’s handling of my next bout today. Fair play was kept all the way through. Referee – Hall of famer Robert Byrd. Judges – Burt Clements. Dave Morreti and Guido Cavalerri. 8oz gloves approved, with pre and post fight analysis of the gloves on the night. This was handled very well and very fairly by the NSAC. I am very pleased and respect the commissions ruling on this. Ten days until fight time.

Diaz is fined 2.5% or $50,000 of his $2 million purse from UFC 202 for throwing water bottles at McGregor during the fight’s press conference. He will also have to carry out 50 hours of community service. Despite Diaz throwing the bottles first, he receives a lesser fine than McGregor, who was fined $150,000.

The Nevada State Athletic Commission fines McGregor five-percent of his $3 million purse ($150,000) for the water bottle fight with Diaz inside the MGM Grand in Las Vegas in August. At least one security guard from the hotel was hit with a bottle or can that was thrown by McGregor. He was also fined 50 hours of community service, to be served within six months. McGregor was on the phone from Ireland:

I just want to apologize for the incident, it was a very unusual incident that unfolded. I acted wrong and all I can say is I’m sorry.

Diaz’s hearing will be heard at a later date.

Ireland’s Advertising Standards Authority says complaints against a Budweiser ad featuring McGregor have been upheld. McGregor was the face of a competition which offered customers the opportunity to win €50,000 to travel to America to “fulfil their dreams”. Complainants said the ad was “irresponsible and inappropriate” because it linked a role model for children to alcohol, and that MMA was an “aggressive sport” and that linking it to an alcohol product was sending out a “dangerous message” to young children. The ASAI agreed with the complaints, saying the MMA star was a hero for young people and that the advertisement “should not be used in the same format again”.

What's this? This is an unbiased just-the-facts news timeline ('newsline') about Conor McGregor, created by Newslines contributors. Make it grow it by finding and summarising news. Learn more