Hughes, a UFC Hall of Famer, who is a two-time welterweight champion who beat GSP, BJ Penn and Royce Gracie, is taken to hospital with serious injuries after his truck is hit by a train. Dana White says Hughes suffered head trauma and his family is on their way out to be with him. He last fought in the UFC in 2011. Hospital statement:

Hughes’ family asks that you respect their privacy during this difficult time. They ask that you keep Matt in your thoughts and prayers.

Our thoughts are with Matt Hughes and his family. pic.twitter.com/TF6BaHSa85

Teigen escapes unhurt from a hit-and-run car crash near Hollywood. She was seated in a passenger seat of a vehicle that was hit. An unnamed suspect has been arrested by Hollywood division on misdemeanor hit and run.

Got hit by a speeding loon while turning and he fled but cops were right there. Cops who talk to E!, apparently. Not a big deal. I'm good!

I got out of the car and was like phew that was kind of a boring day anyhow.

Holloway kills one person and injures 37 others when she drove through a sidewalk in Las Vegas Strip. Three victims are in critical condition and two other victims in serious but stable condition. Police:

She would not explain why she drove onto the sidewalk but remembered a body bouncing off of her windshield, breaking it.

Chambers’ Hyundai Elantra saloon strikes an unoccupied motorcycle of an officer who was working security at OSU’s homecoming parade, then goes into the crowd, killing four people, including a two-year-old boy, and injuring over 40 more. Many of the injured are schoolchildren. Chambers is arrested at the scene, for driving under the influence. 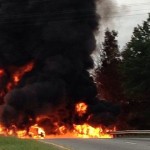 A tractor-trailer, two SUVs, and a pickup truck are involved in an accident that kills three people. The Spartanburg County Coroner’s Office identifies the victims as 31-year-old John Daniel Fink, his 9-year-old son, James Landon Fink, and Donna Renee Bailey. The Fink’s are from Zirconia, North Carolina. Ms. Bailey lived in Marysville, Tennessee.

Reynolds is the victim of a hit-and-run accident in Vancouver, Canada. He is uninjured. The driver is allegedly a paparazzo.

The Kardashians are in a minor car accident. Kim, Khloe, Jenner and North West are in the car when a semi-truck throws snow onto the windows making it difficult for Khloe to see while driving. She loses control of the car for a few minutes, spins around and ends up in a ditch. No injuries are reported. Kim:

Thank you God for watching over us and keeping us safe.

Detectives for the Los Angeles County Sheriff’s Department are using video recovered from a mass transit bus driving in the opposite direction as Jenner as a part of their crash investigation. Law enforcement source:

(Investigators) do have a videotape from a bus.

Unidentified sources tell TMZ the video clearly shows Jenner’s Cadillac Escalade rear-ending Howe’s white Lexus and sending it into the path of an oncoming Hummer, without Howe ever touching the Prius lined up in front of her. Jenner then plows into the Prius before coming to a stop. Law enforcement source says it is a “leading possibility” that Jenner hit both cars in front of him.

It’s a terrible loss for all of us at CBS News. It is such a tragedy made worse because we lost him in a car accident, a man who has escaped more difficult situations than almost any journalist in modern times. Bob was a reporter’s reporter. He was driven by a natural curiosity that took him all over the world covering every kind of story imaginable. There is no one else like Bob Simon. All of us at CBS News and particularly at 60 Minutes will miss him very much. Jenner’s Cadillac Escalade rear ends a Lexus on the Pacific Coast Highway in Malibu, causing it to veer into oncoming traffic where it is hit by a Hummer. The driver of the Lexus dies at the scene. Witness:

Bruce seemed physically okay after the accident, but he acted extremely concerned about the other people involved. There was one fatality and several other people were injured. Bruce walked around the accident scene without obvious injuries, but his car was damaged.

Feld says that his biking days are over after a crash that leaves him unconscious and in the hospital.

I have no memory of what actually happened. The last thing I remember, after much prompting, was turning left onto Iris from Broadway. While the 911 calls were all for a hit and run, there’s no real evidence of that since my bike is generally fine and nothing, including me, looks like it was hit by a car. At this point, I’m guessing that I took the turn too wide and must have hit the curb and lost control of the bike. Maybe I squeezed my breaks and went over my handlebars. Or maybe I crossed over into a parallel universe for a little while and when I came back landed on my face.

I’m doing ok today. Nothing is broken and according to the hospital I don’t have a concussion. I’ve very banged up. I’ll probably have two black eyes, I have a sprained thumb, and lots of cuts and bruises everywhere. My face is very swollen and my head is very bumpy and weird from all the swelling. I have a persistent headache, no matter how much Advil I take. My glasses are destroyed so I’m wearing some old ones, which probably isn’t helping…My biking career, short as it was, is officially over.

Morgan and Jeffrey Millea are airlifted to Robert Wood Johnson University Hospital in New Brunswick and is in critical condition following a 5-car pile-up. Their chauffeured limousine bus was struck from behind by a Walmart truck. New Jersey State police say they believe the Walmart truck driver was dozing and failed to see traffic slowing in front of him before it was too late – rear-ending the Mercedes limo-bus and prompting a chain-reaction crash with a second tractor-trailer, an SUV and two cars. The limo rotated clockwise and flipped over. Police say:

Driver failed to observe slow-moving traffic ahead. He observed at the last minute – just prior to impact – the limo bus carrying Morgan and his party.

McNair, one of Morgan’s writers, dies in the crash. Two other comedians traveling in the bus, Harris Stanton and Ardie Fuqua, were also injured. Morgan’s driver, Tyrone Gale says:

I climbed around and heard Tracy screaming for help. I climbed up on the body of the limo bus…but I couldn’t reach them.