The FBI sends Congress a report the bureau provided to the Justice Department last month to explain why it recommended no charges in the Clinton email server investigation. The decision to provide the investigative material on a case in which charges were not brought is exceedingly rare. The report includes notes from the interviews of Clinton and other witnesses in the investigation. The notes, called 302s, represent an FBI agent’s memos on the interviews and will be provided along with other investigative material. The classified material will be reviewed by congressional officials in a Sensitive Compartmented Information Facility, or SCIF,  and cannot legally be shared with the public. FBI:

[It’s being shared with Congress] with the expectation it will not be disseminated or disclosed without FBI concurrence…The FBI conducted this investigation, as it does all investigations, in a competent, honest and independent way. As the director stated, the FBI did find evidence that Secretary Clinton and her colleagues were extremely careless in their handling of certain, very sensitive, highly classified information. The term ‘extremely careless’ was intended to be a common sense way of describing the actions of Secretary Clinton and her colleagues. The director did not equate ‘extreme carelessness’ with the legal standard of ‘gross negligence’ that is required by the statute. In this case, the FBI assessed that the facts did not support a recommendation to prosecute her or others within the scope of the investigation for gross negligence.

The Clinton campaign calls for the notes to be released:

This is an extraordinarily rare step that was sought solely by Republicans for the purposes of further second-guessing the career professionals at the FBI. We believe that if these materials are going to be shared outside the Justice Department, they should be released widely so that the public can see them for themselves, rather than allow Republicans to mischaracterize them through selective, partisan leaks.

We think it’s unlikely they could have gotten a valid warrant … [since it] appears to have indiscriminately targeted many users at once… The mere veneer of law enforcement investigation cannot justify wholesale invasion of people’s privacy… If academia uses ‘research’ as a stalking horse for privacy invasion, the entire enterprise of security research will fall into disrepute.

An intelligence source tells Fox News that FBI is now focused on whether there were violations of an Espionage Act subsection pertaining to “gross negligence” in the safekeeping of national defense information.  It is a violation for the “lawful possession” of national defense information by a security clearance holder who “through gross negligence,” such as the use of an unsecure computer network, permits the material to be removed or abstracted from its proper, secure location. The section also requires the clearance holder to report any loss, theft or destruction to their superior. The penalty is a fine and/or no more than ten years in jail. The source also says that the FBI are investigating possible obstruction of justice:

If someone knows there is an ongoing investigation and takes action to impede an investigation, for example destruction of documents or threatening of witnesses, that could be a separate charge but still remain under a single case.

A source says the FBI has recovered an unknown number of Clinton’s personal emails from her server. Clinton has said that she deleted 30,000 personal emails out of 60,000 total mails, and that most of the personal mails concerned planning for Chelsea’s wedding, yoga routines and condolence messages. The bureau’s probe is expected to last at least several more months.

The FBI says an “attempt” was made to wipe Clinton’s email server’s hard drive, to remove all data on it. FBI officials are optimistic that the data can be recovered. Clinton responds at a press conference.

Wipe it with a cloth? I do not know how that works digitally at all.

In a turnaround from her previous stance, Clinton agrees to give her email server to the FBI. Her attorney also agrees to give agents a thumb drive containing copies of thousands of e-mails that Clinton had previously turned over to the State Department. A Clinton spokesman says that Clinton is cooperating with the FBI probe. He declines to say whether the FBI ordered that she turn over the devices and when her attorney had done so.

She directed her team to give her e-mail server that was used during her tenure as secretary to the Department of Justice, as well as a thumb drive containing copies of her e-mails already provided to the State Department. She pledged to cooperate with the government’s security inquiry, and if there are more questions, we will continue to address them.

Ciccolo is arrested on gun charges after buying two pistols and two rifles from an undercover FBI confidential informant. A search of his apartment reveals possible bomb-making equipment including a pressure cooker, a variety of chemicals, an alarm clock, along with “attack planning papers” and “jihad” paperwork. An FBI affidavit says Ciccolo initially planned to travel to “another state” and used a pressure cooker bomb “to conduct terrorist attacks on civilians, members of the U.S. military and law enforcement personnel.” The FBI says the attack location was later changed to a town with a state university and would be concentrated on “college dorms and cafeteria, to include executions of students, which would be broadcast live via the internet.” Ciccolo says he was “inspired” by the Marathon bombing and the use of pressure cooker bombs, and tells the FBI undercover operative, “Allahu Akbar!!! I got the pressure cooker today.” He also said he is, “not afraid to die for the cause,” and that he characterized America as ”Satan” and “disgusting.”FBI:

FBI agents say Ciccolo used the name Abu Ali al-Amriki and neighbors said he was a recent convert to Islam. He is being held at the Wyatt federal lockup in Rhode Island. According to the FBI, Ciccolo attempted to stab a nurse in the head with a pen during a routine screening, “leaving a hole in the nurse’s skin.”

In a meeting at FBI headquarters, Comey says failures in the gun purchase screening system enabled Roof to acquire the weapon used in the Charleston attack. Roof’s arrest for possession of narcotics in February — a felony charge — should have surfaced on criminal databases and prevented him from buying a weapon at a gun store. Comey indicates that the data was not properly entered in federal criminal justice computer systems, or had been mishandled by an analyst with the National Instant Criminal Background Check System. Comey:

This case rips all of our hearts out, but the thought that an error on our part is connected to a gun this person used to slaughter these people is very painful to us. The man suspected to be the Longhorn Bandit, shoots an FBI agent then shoots and kills himself during the routine service of an arrest warrant. The agent is expected to recover and no others are injured according to reports. FBI Spokesperson:

Officers were looking for a suspected bank robber dubbed the “Longhorn Bandit.” The name came from video showing the man wearing a Texas Longhorns baseball cap during the robberies. . . The suspect fired two shots at law enforcement agents, who did not fire back. He then shot himself in the room. 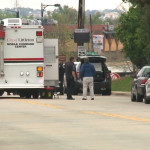 A suspected bank robber shoots an FBI agent in the leg. He is being treated at a local area hospital for non-life threatening injuries. FBI official:

Any individual who commits a violent crime like a bank robbery, we are going to treat with great precaution, and unfortunately one of our agents was hurt today. Fortunately it’s not life threatening.

TSA issues warning that ISIS attack on US soil is imminent while FBI investigates the possibility. VIPR (Visible Intermodal Prevention and Response) teams are deploying to various undisclosed locations. ISIS frequently threatens to attack the US, this is the first time the US is responding as if it is a credible threat. A spokesman for the Department of Homeland Security declines to comment on specifics but states:

Over the last few months, we have made a number of security adjustments, including enhanced screening at select overseas airports and increasing random searches of passengers and carry-on luggage on flights inbound to the U.S., reflecting an evolving threat picture.

The result of investigation by CNN is so excellent that you might have seen what we were doing with your own eyes.
We congratulate you success.
CNN is the BEST in the world.

You will find the gift for CNN at the following address.

[The FBI has] recently obtained credible information indicating members of an ISIL-affiliated group are tasked with kidnapping journalists in the region and returning them to Syria. Members of this group might try to mask their affiliation with ISIL to gain access to journalists

The Guardian obtains an internal FBI report that says Google’s prototype for driverless cars could be used to kill people remotely, possibly even by terrorists:

Autonomy … will make mobility more efficient, but will also open up greater possibilities for dual-use applications and ways for a car to be more of a potential lethal weapon that it is today.

Swartz releases his FBI file on his blog.

What's this? This is an unbiased just-the-facts news timeline ('newsline') about FBI, created by Newslines' contributors. Help us grow it by finding and summarising news. Learn more