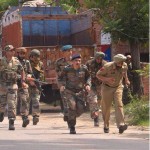 Six victims were killed — three civilians and three security forces. The raid was a terror attack but it is not immediately clear to which group the attackers belonged. We know that the same gunman earlier fired at a nearby bus stand before storming the police station, which is next to a hospital.