What's this? This is an unbiased just-the-facts news summary about ISIS, Syria, Turkey, extracted from the original article by Newslines' contributors. To see the newsline of each topic, click the links below. Learn more 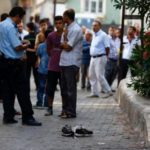 At least 50 people are killed and dozens more wounded latein an attack possibly carried out by a suicide bomber on a wedding party in the Turkish city of Gaziantep near the Syrian border. A senior security official says the device used was the same type as those employed in the July 2015 suicide attack in the border town of Suruc and the October 2015 suicide bombing of a rally of pro-Kurdish activists in Ankara. Reports say the attack was carried out by a suicide bomber aged between 12 and 14. Turkey’s foreign minister:

Daesh should be completely cleansed from our borders and we are ready to do what it takes for that.