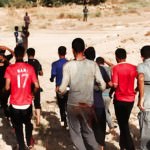 Pictures posted on a militant website appear to show ISIS fighters forcing captive soldiers to lie down in a shallow ditch, and further photos appear to show their bodies soaked with blood after being shot. Most are dressed in civilian clothes, with some wearing military uniforms underneath. Iraqi military spokesman Qassim al-Moussawi confirms the photos’ authenticity and says he is aware of cases of mass murder of captured soldiers. A photo caption reads:

This is the fate of the Shi’ites which Nuri (al-Maliki, Iraq’s president) brought to fight the Sunnis