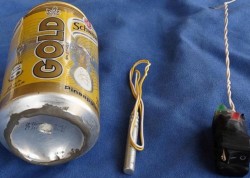 ISIS publishes a photo of the bomb which brought down the Russian jetliner, disguised as a drinks can, in Dabiq magazine.

The divided Crusaders of the East and West thought themselves safe in their jets as they cowardly bombarded the Muslims of the Caliphate. And so revenge was exacted upon those who felt safe in the cockpits…This was to show the Russians and whoever allies with them that they will have no safety in the lands and airspace of the Muslims. That their daily killing of dozens in (Syria) through their air strikes will only bring them calamities.